On July 1, 2022, Youth Powered Eco-System to Advance Urban Adolescent Health (YPE4AH) Project Champions for Change C4C Adolescents embarked on a humanitarian service project in Ikorodu area of Lagos State. These Adolescents were trained under the 5-years USAID-YPE4AH Project in Lagos and Kano State.

TEENSMATA is a name of a program under YPE4AH Project

The exercise was initiated by the young leaders to further take proactive actions in providing solutions to challenges facing young adolescents in society. Over 35 young adolescents from Ikorodu, Lagos Island and Gbagada came together in Ikorodu to clean Ladega Market. 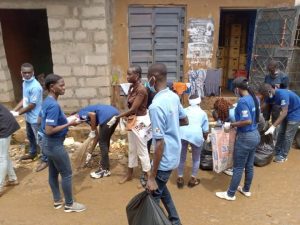 While the cleaning exercise was ongoing, the Champions were also interfacing with young people, market men/women, market Attendance and Passer-by on issues affecting adolescents such as the high rate of abuse of drugs and Gender-Based Violence. They also encouraged the public to enrol their children between the ages of 15-19 years to the centres close to their locations.

The adolescents engaged in a thorough clean-up of ladega market, which attracted people within the community. Community people commended them for making out time to render such magnitude services. They also spoke in the local language to drive their ask and messages. One of the women feels highly elated by the adolescents’ gesture.

YPE4AH Project Team and Youth Champions were there to support the young adolescents and guide them on their planning. They were equally glad by their initiative to advance their community. It will further help create a selfless service mindset in them.

Champion Nurudeen who is an Adolescent from Araromi thanked United State Agency for International Development (USAID) for thinking of Nigeria for this impactful project. He said the project has helped him discovered himself and has built his leadership skills. This is why he is taking responsibility to advance his community with what he has demonstrated; Nurudeen said.