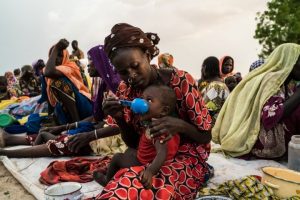 A mother who just arrived at Maiduguri after fleeing her home feeds her child. Photo source: ICRC

LAST YEAR, when the Nigerian government launched a five-year nutrition action plan to reduce hunger and malnutrition in the country, stakeholders in the food and nutrition sector at the Presidential Enabling Business Environment meeting were brimming with excitement.

The action plan titled the “National Multi-Sectoral Plan of Action for Food and Nutrition (NMPFAN) 2021-2025” seeks to guide the implementation of interventions and programmes to address the problems of hunger and malnutrition across all sectors in Nigeria.

The chairman of the National Council on Nutrition also said the plan “will reduce stunting rate among under-five year olds to 18% by 2025 through the scaling up of priority high impact nutrition specific and nutrition sensitive interventions.”

But analysts are quick to point out that the spate of violence across the country poses significant threats to the plan, like food insecurity and high inflation plague the country.

The decade-long insurgency in the northeast and armed banditry in the northwest has led to a decline in agricultural production, displacing a large number of people and putting considerable pressure on food resources.

Since 2018, armed banditry, especially in the northwest where terror groups sack villages, kidnap for ransom, has increased across Nigeria. This atmosphere of fear does not spare farmers in the region who have had to abandon their farms in their droves for safety.

An estimated 1.6 million people are believed to be food insecure due in large part to raging insecurity in the region. And quite pathetic, five per cent of the total food insecure population now lives in IDPs camps where children are more likely to suffer from malnutrition.

Malnutrition is one of the world’s major public health and development concerns. It causes rapid weight loss and makes under-five children 11.6 times more likely to die than well-nourished children due to symptoms like lower respiratory infection, severe dehydration, and high fever.

According to the study, two in every IDP household do not have sufficient food supply, inhibiting many families from getting optimum food intake and often resulting in severe acute malnutrition (SAM).

Severe malnutrition contributes to half of the one million children who die in Nigeria every year, according to the National Nutrition and Health Survey.

Dr Imam Mustapha, an expert on Nutrigenomics and lecturer at Usmanu Danfodiyo University, Sokoto, said children bear the brunt of the growing insecurity in the country as a result of the effect of the crisis on their parents, as they depend largely on them.

Imam added that insecurity and the resulting food crisis which is fast depleting the supply chain across the country is responsible for the deepening child malnutrition in the region.

“Children are largely dependent on adults for food. And looking at the spate of violence in the northwest which has forced tens of thousands of people from their primary base, and source of livelihood, parents are under so much pressure that providing food for their children may not even be their major concern because they do not even have food for themselves.

“There is also a decrease in food supply in the region which means that the one in circulation is not even enough to feed everyone. If an adult cannot provide nutritious food for a child, then it means hunger will set in which could degenerate into severe acute malnutrition among children.”

In May, the UN Food and Agriculture Organization (FAO) cautioned that at least 9.2 million Nigerians face a crisis or worse levels of food insecurity this year because of the country’s conflicts.

Dr Umar corroborates the report, stating that malnutrition has both “immediate and long term consequences.” Apart from weakening the immune system, it also slows the pace of human capital development which invariably affects the economy.

“We are just starting to understand the effect of malnutrition on individuals, and the picture doesn’t look good. Any person that suffers acute malnutrition at a younger age, they tend to develop chronic diseases later in life.

And it doesn’t look good for a country when a large number of its population suffers malnutrition-induced diseases later in life. They will not only depend on others but also be unproductive as the government will spend more on them at the expense of other developmental services”

For the national action plan on nutrition to be effectively implemented, experts believe the rising cases of insecurity in the northwest and the resulting food crisis must be addressed.

“Tackling severe acute malnutrition in crisis ravaged areas like the northwest is as simple as tackling the root causes behind people moving from their primary place to camps where they are likely to suffer malnutrition. Banditry, terrorism and other form of instability must be scrubbed away. And this requires political will on the part of the government,” Imam submitted.

The efforts should, therefore, be complemented with the expansion of the Community Management of Acute Malnutrition (CMAM), one of the many programs introduced to tackle severe acute malnutrition in the country, analysts said.

In addition, CMAM allows timely treatment for those without medical complications, with ready-to-use therapeutic foods (RUTF) at home.

If expanded and integrated with other preventive measures, it could prevent 19 per cent of the death of children in the country as it has a high recovery rate and can be 90 per cent cost-effective than conventional treatment.

Crisis in Ethiopia: Rise in political instability and purge into civil war